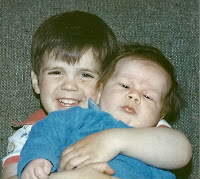 Here he is with proud big brother EJ

This child was so mild mannered he was scary. Very content, but independent.


During his 3 month checkup we discovered that he had a lazy eye.  Believe it or not, glasses were prescribed. 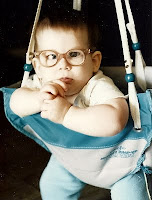 I was surprised he wore them
The glasses were unsuccessful, so at 8 months I had to hand over my son to a surgeon.  I cried and cried....this was the hardest thing I had EVER done!
After surgery, the nurse brought me to ICU to "comfort" him as he was crying.  I still remember the look on the nurse as she rose from the rocking chair with crying baby in her arms.  I took him from her and laid him back into the crib, as I rubbed his back and sang to him.  I knew my son, he didn't want cuddles, he wanted his space....he hasn't changed!
The day after he turned 3, he broke his femur (thigh bone).  Once again I am forced to hand my son over to a surgeon! 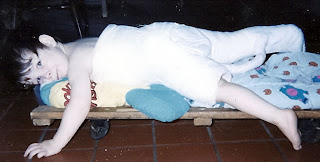 This resulted in a full body cast for 6 weeks
As time went by we noticed that his "lazy eye" which had surgery was still lazy.

Now time to use an eye patch
Is anyone noticing a pattern here?  Every family has one...the child that gets attention with medical issues! (oh yea, and practical jokes, but that is another post in itself)
Several years of just the basic eye doctor visits, physicals, nothing "major", until he decided to take up snowboarding....

I really should have known better than to allow that!
Now my little "zekey-boy" is turning 17!  He'll be graduating this year and most likely breaking my  heart by moving on soon.
Well, he has to wait at least until he gets his braces off (yes, even the braces required oral surgery and pulling of teeth...he can't do anything simply)

So this cute little guy has turned into this handsome, caring, funny, giving young man.
Why, oh why, did I have to blink!
I love you Zekey-boy