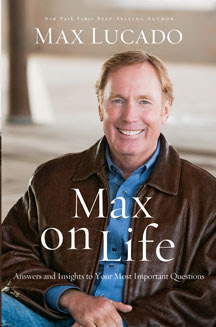 Anytime I have the opportunity to read something by Max Lucado I don't hesitate for a second.  When BookSneeze offered the above book it was a no-brainer for me!
In this book, Max Lucado answers 172 questions about life.  With more than 30 years as a pastor, husband and father, he has herded a lot of questions.  From the sincere, to probably the skeptic trying to "catch" him off guard.

Divided into 7 sections:
HOPE
HURT
HELP
HIM/HER
HOM
HAVE/HAVE-NOTS
HEREAFTER
I want to share here one question from each section and a summary of the answer given:
HOPE:
Some days I doubt God, I doubt His goodness. His nearness and that He even exists.  When I doubt Him, does He leave me?

Max begins with a story of him running away as a child because he had enough of his father's rules.  Then asks, did this change the status of being his father's son?  "He called himself my father even when I didn't call myself his son".  It is the same with God!
HURT
I have a short temper and seem to get angry at the smallest things.  I know this causes friction in my relationships, and that hurts  How do I get out of this rut?
A comparison is given of how a natural canyon is formed.....slowly, one drip at a time.  It is the same with relationships and friction...it happens slowly.  Take care of "each drip".  "Do it before your anger digs a canyon in your life...with you on one side adn everyone you know on the other"
HELP
Does God lead us through feelings?  When people say 'I sense God's guidance', what are they describing?
If your 'feelings' go against anything God clearly states in his Word, it's not from God.  BUT "He will faithfully lead you through the words of his Scripture and the advice of his faithful".
HIM/HER
No one warned my wife and me about the whole sexual difference thing.  I think this discussion should be in all premarital classes.  We are sorting it out, but it was a surprising challenge.
It's a fact, men and woman are different... we love it and hate it at the same time.
Men see sex as a primary need, women-as optional.
"Pray about this issue:  Lord, this is your will and your marriage.  Help us honor you in this bed"
HOME
I have one child in middle school and another starting to drive.  Am I wrong to worry about them?
As a parent, it's your job, but remember they were God's first and still!
"God's big message to moms and dads?  Bring your children to me.  Raise them in a greenhouse of prayer".
HAVES/HAVE NOTS
My father is a doctor.  My grandfather is a doctor.  Everyone expects me to be a doctor.  I want to study music.  Did I miss something?
"You cannot be anything you want to be. But you can be everything God wants you to be! Live out of the bag God gave you.  Enjoy making music."  (I so love this answer!)
HEREAFTER
I don't like the narrow-mindedness of Christians.  It is absurd to say that Jesus is the only way to heaven.
We are different and need to respect each others beliefs.  BUT "How can all religions lead to God when they are so different?  Every non-Christian religion says, 'You can save yourself.'  Jesus says, 'My death on the cross saves you.' John 10:9
By contrast, Jesus blazed a stand-alone trail void of self-salvation. He cleared a one-of-a-kind passageway uncluttered by human effort.  Christ came, not for the strong, but for the weak; not for the righteous, but for the sinner."
What did you think of this "appetizer from Max's new book?
Thanks again, Max Lucado!