My Week At A Glance Catch-Up

Catch-Up
My last "My Week At A Glance" told the story of how one phone call changed my week....little did I know that it would change my life!
I spent the next 2 weeks at a hospital with my mom and dad.  He entered the hospital after having fallen and breaking his hip.  After enduring hip replacement surgery it was discovered that his hip broke due to cancer and THEN he fell. And that cancer was throughout his body, which led me to write this short post and a few days later this one.
What we thought was going to be quick, turned into 10 days when I wrote this.  Since then I have been quiet.  So MUCH has happened, so many emotions that it's hard to even write about it.
Two weeks from the time the hip broke, dad entered a rehab.  The idea was to work with him to allow him to be as mobile as possible as his desire was to return to his home in Florida to spend his last days.  After 3 weeks, it was decided that it was time for him to be discharged and go to Florida.  So on Tuesday, October 18, I said 'see ya later' to my dad as I left him in my brother's care at the airport.  Yea, not the easiest day of my life :(
In the middle of all this, I spent a week with my oldest daughter in a different hospital.  Read that story here.
Now I am home trying to get back to a routine, normal life, quiet....we'll see how long that lasts :)  But I will take one day at a time, as I always should.  Thanking God for his plans and His preparing me for what is next.
While I was 'elsewhere', life at home continued.  Hubby worked and got our firewood ready.  Julie-bug kept the house in order in my absence.  My Zekey-boy worked with his dad and finished the body work on his 1989 Ford F150.

Nice ride!
A few days after I came home to stay, a neighbor asked if we'd be willing to watch his two girls, ages 3 & 4, for 4 hours-3 days a week. So now Julie-bug has herself a little job with me as the 'supervisor'.   She is even doing a little school with them every day.  What a great opportunity!
Wednesday I had the pleasure of attending a 97th birthday party for a neighbor.  It was nice seeing some town people that I don't see all that often. 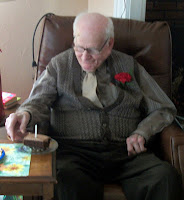 Honestly, I don't care to live that long, I've a better place to be :)
This is what is seen when coming out of Canada from American customs....just so those Canadians aren't confused as to where Maine and Florida are!  I did a double take when I first saw this and had to take a picture!  Really???? 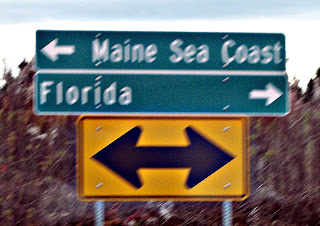 located 1/2 mile from my house
I've been working on another quilt this week.  It is black and white. I'm liking how it is coming out.  Here are the 2 basic squares: 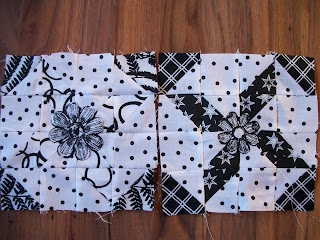 there will be 15 of each
After putting these together I wish I would have used the darker checked fabric on the 2nd square as the 'windmill' on the first square...but there's no turning back now!
I was able to complete my 10th Gabby Mom review this week.  It was for a great book by Lorrie Flem called "Welcome Home, Daddy".  I have enjoyed  working with Lorrie Flem, publisher of Eternal Encouragement magazine, this year and am looking forward in becoming even more involved in this ministry in 2012.
Now to end this My Week At a Glance Catch Up, here are some great foliage pictures I took during the many miles I traveled the past month: 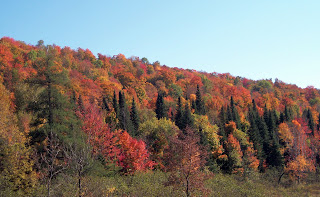 What 'news' do you have?

ME Week at a Glance