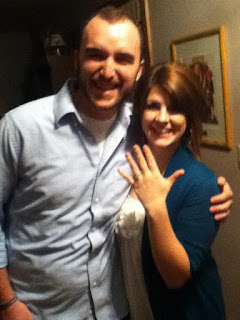 "It was a Thursday, Sam had just finished a long day of work, tired but glad she was going to hang out with her boyfriend later that night.
As she started to drive out of the parking lot her phone rang. It was Jeremiah. She laughed to herself a bit as she picked up, thinking about how he had perfect timing. "Hey, I just got outta work." she started to say but was interupted by "Turn the car around!"
She looked around and there he was, pulling into the parking lot. He had come to surprise her at work. They chatted for a bit and then headed over to his house to relax.
As she drove back she started to think about how it was weird that he had come to see her in the middle of the week, he never did that. She asked him about it later and his face told her something was going on, but she couldn't figure out exactly what. She guessed everything from maybe she was going to get a kitten and he wanted to be there to see it, to he had come to pick up the engagment ring she knew he had been looking around to buy. He wouldn't tell her much, but she did manage to get out of him that he was going to ask her to marry him before Thanksgiving.
They had been dating almost six months and been talking about getting married about three months into the relationship. He was easily the best guy she had ever met and had the ability to understand her like no other. He was her perfect guy, the one she had always imagined. They both knew their relationship was incredibly blessed by God. Not only because of the love they felt from each other but also because everyone who saw them together knew it was meant to be.
They enjoyed the time they spent together that Thursday and continued on with their normal lives until the weekend.
That weekend they had planned to go out to eat with his family to celebrate his upcoming birthday. Sam's Mom was there visiting from Vermont and her sister, Mandie was going to join them as well.
They all gathered in the Vorce's living room that Saturday night around six o'clock. Jeremiah's Dad started to list everything they were going out to celebrate "Mom's birthday, Jess's birthday, Jeremy's birthday, Sam's Mom's birthday and Sam and Jeremy's six month anniversary."
That Saturday marked six months of dating for the two of them.  As everyone stood to head out the door Jeremy stopped them all "Hold on a second everyone, there's something I want to say."
Sam was beside him, with her arm around his waist. She looked up, surprised. "Sam, these past six months have been incredible. We've had our ups and downs, especially when you got sick but I have been truly blessed by having you in my life. I know on facebook you said let's have 600 more months together but let's make it 6000."
He pulled a black box out of his pocket and got down on one knee."Sam, will you marry me?"
She was shocked, was he serious? He had pretended to ask her many times before, but that ring? It was beautiful, exactly what she wanted. It couldn't be one of his tricks.
"Are you serious?" She had to ask. He nodded and as she looked in his eyes she saw it was really true! He was asking her to marry him. "YES!" she said as he stood up and placed the ring on her finger. She hugged him and kissed him and laughed all at once.
Everyone else gathered around, the Mom's crying, offering hugs and congratulations. Then the phone calls started, everyone needed to know the big news!!!
Sam later on found out the reason he had been acting so weird on Thursday was because he had driven halfway between Vermont and New Hampshire to meet with her Dad to get his blessing before he asked. He had had the ring for about a month and was just waiting for the final piece of the puzzle to fit in, asking her Dad. He had given his blessing on Thursday and Jeremy was going to wait until next weekend to ask, on his birthday but couldn't wait. Which was a good thing, because if he had tried to do some crazy romantic thing, Sam would have definitely guessed what he was doing and it was important to him that she be surprised.
God had His hand in the little details, getting Sam's Mom there, Sam not having a clue, the ring being perfect, the sweet heartfelt proposal, the joy of the moment shared with family and friends.
Jeremy and Sam are currently starting to plan a wedding planned for early fall of 2012." 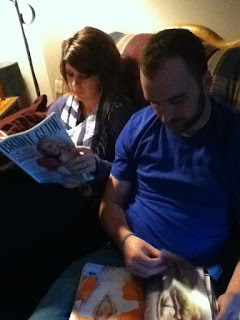 Here they are literally the next day...planning :)
I am thrilled beyond words that I was able to witness this very special moment in my daughter's life!
Let's just say this was just what I needed to brighten up a not very enjoyable month/week I've been experiencing around here.....but THAT is another story!