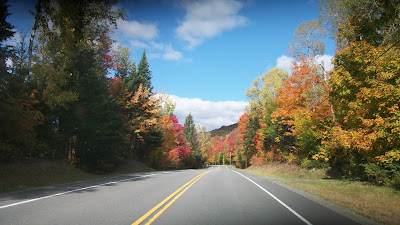 The middle of nowhere?

Well, if you find yourself there, look me up, cuz that has been where I've called home for 29 years.

You know you definitely live in the middle of nowhere when a trip to Walmart is an all day adventure.  OR when you mention your hometown people look at you and say "Where is that?"  Your explanation of on the border of Canada and NH in a town with a population of less than 200 (maybe 300 in the summer months) and with a grimace they ask "why would you want to live there?"  Um..yea...the middle of nowhere.

Every place has it's pros and cons right?  Think about it...do you love where you live 100% of the time?  No, right?.....well...right?  Anyway....because I am genetically negative from my father--a fact my mom recently reminded me of--I tend to view where I live from the con-side.  But today I was reminded of one of the pros that makes this a very unique middle of nowhere place.

Because wildlife also makes its home in the middle of nowhere it is not uncommon to see or even have run into you some kind of furry or winged animal.  Be it a fox, raccoon, deer, moose, goose, hawk, partridge, beaver and so on.  This happens so often that unless it is an unusually rare one of the above----like a family of foxes, a tiny baby deer no bigger than a dog (which I did see this summer), a white moose (which I also did see a couple of years ago...very,very cool and rare), a family of geese ( seen this past week more than once), a moose family with mom/dad and twins (also have seen this), or a huge moose with a gigantic rack that you wondered how he maneuvered through the woods of the middle of nowhere (also have seen, but only once many, many, years ago)---you just keep going and pay no mind to cuz you've got a long drive ahead of you to get to Walmart.

A rare sighting though is the elusive and private black bear.  The few times I've seen one of those is a rare treat (I do have a story of how we saw one up close and personal 15 or more years ago)

Today I saw a tiny little baby bear cub.  I was travelling home (not from Walmart this time) and around the corner I saw this little black blob come out of the woods...my first thought was "Where'd that tiny puppy come from?"  But as I got closer I realized that was NOT a tiny puppy but a tiny black bear so I stopped dead in the middle of the road (don't worry, remember I'm in the middle of nowhere so no one else was on the road but I did put my flashers on just in case someone else may be out and about today--never can be too safe you know). I kept my eyes glued to that little guy as I frantically groped around in my purse to find my camera  begging him to stay in front of me long enough to get a picture.  But he didn't want his picture taken and hobbled off into the woods just as my hand found the camera.

I thought of getting out of the car and trying to see him in the woods, but I know that where baby bear is mama bear is not far away...and not wanting to make mama bear angry I decided to continue on my way smiling at what I had just seen.